EiTB replaces satellite broadcasting in Europe for Internet and cable

From May 1st, ETBSat will no longer broadcast via satellite in Europe. However, viewers will be able to keep on watching ETBSat on the Internet.

Basque Country's public media group EiTB replaced last May 1st the broadcasting of ETB Sat via Astra satellite in Europe for with broadcasting on the Internet via the eitb.com website and the EiTB-on demand platform. It will also be available on some of the most important cable operators such as ONO, Galicia's R and France's  SFR, Bouygues, Virgin France and Thema.

This change will allow the public media group to broadcast the programming of this international channel using a more modern, accessible and affordable technology. This bilingual channel gathers the most outstanding contents of EITB's generalist channels, as well as the new programs and the main sports events.

This step makes it possible to diversify the consumption of ETB Sat all over Europe. The current development of the new communication technologies opens all doors for the ETB Sat signal to be accessible on www.eitb.com (www.eitb.com/es/television/etb-sat/) and on all mobile devices with an internet connection such as tablets, smartphones.

EiTB-on-demand also allows viewers to consume the audiovisual contents they like most, wherever they are and whenever they want, no matter the original broadcasting timetable set by the channel.

The viewers' acceptance of this platform of audiovisual content has been outstanding since it was launched February 2012. Only last moth, 78,900 unique users used the platform that recorded 463,509 pageviews.

Viewers can write an e-mail to etbsat@eitb.com in order to ask any doubt on this matter. All the information on how to watch EITB is available on eitb.com.

ETB Sat started broadcasting March 2001 via ASTRA satellite in Europe in response to the growing demand for the EITB contents from Basque citizens living outside the Basque Country.

Programs on ETBSat are an overview of those shown on ETB-1 (in the Basque language, Euskera) and ETB-2 (in Spanish). ETB Sat broadcasts a general selection of shows seen on the Group's two main TV stations, as well as sports events such as pelota games or third-tier soccer matches. 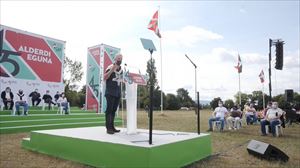