N.A.B.O.'s 'Join the Conversation, learn Basque' video targets to promote Basque language lessons in the United States. It has been recorded by Artzainak and Zuretzako director Javi Zubizarreta. 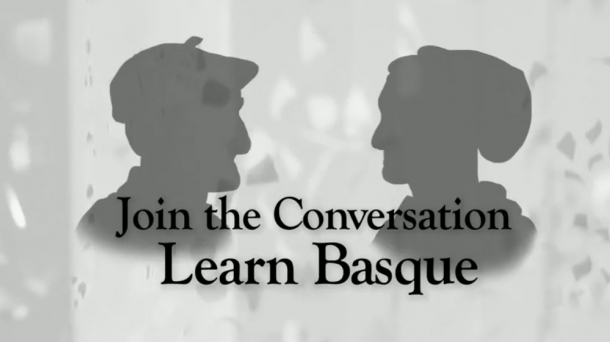 It has been estimated that of the approximately 6,000 languages currently spoken in the world, one-half will be lost in the next 200 years. The main characters of a series of videos produced by the North American Basque Organizations work to ensure that one of those languages, the Basque language, called Euskera and spoken by less than a million and half people, will continue to thrive well into the 21st century.

Most of them Boiseans and of Basque heritage, they did not learn the language at an early age because their parents preferred them to learn English and fit into the American society. Nowadays, they take Euskera classes eager to learn and preserve the Basque language.

"All my family speaks Basque, why didn't they teach me?, I do not know, but I want to jump on the wagon", says Naiara Arozamena. For Julie Lachiondo-Lliteras, who spoke Basque as a child but forgot over the years, it is also a matter of identity. "We are Basque and because we are Basque, we have to be able to learn the language, we have to preserve it", she explains.

"For my identity it is to feel a little more complete", says Henar Chico, who was born in the Basque Country but also forgot over the years .

For others, it is a way to reconnect with their roots in a deeper way and to speak with their family in their native tongue. "I am going more and more to being Basque, Joshua Uriarte says proud."

As surprising as it may seem, there also non-Basque students. In the case of Cody Beaudreau, he confesses to being a language geek and to being really interested in Basque culture and language. He even has spent some time in the Basque Country teaching English and learning Basque. As far as Morgan Persons, it is about singing. "I have sung in the choir for the last ten years and I wanted to know what we were singing", he explains as he laughs.

This is one of the things that surprised most Javi Zubizarreta, director of the short film. "You really have to admire these non-Basque students. Basque is a tough, tough language. To learn it just for the challenge and appreciation of language, it’s really something," explains the Basque-American director, who has also directed Zuretzako and award-winning Artzainak.

Join the Conversation - Adult Basque Language Classes targets to promote Basque language lessons in the United States through the North American Basque Organizations. According to Zubizarreta, the NABO video will help all those people who would love to learn the language, but don't think it's possible or think it would take too much work. "Hopefully, when they see that the classes are approachable, manageable, and very doable, they will be more willing to set aside some time in their schedule and take the plunge."