Fran and Edurne, two newlyweds, are welcomed by some Basque dancers who were expected to dance an aurresku but do something else. 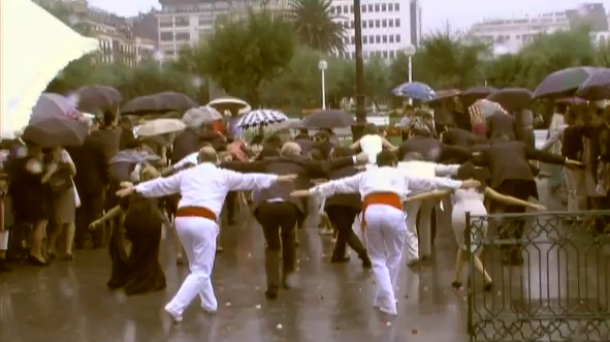 A video of a wedding held in the seaside city of Donostia-San Sebastian has become an internet sensation in the Basque Country racking up over 64,000 viewings on YouTube and dozens of comments since it was posted on the video-sharing website last autumn.

Donostia-San Sebastian, a seaside city in the north of the Basque Country and one of TripAdvisor's top 15 destinations "on the rise in 2012, is usually featured on the UK and US press because of its much-documented collection of Michelin-starred restaurants. The 'beautiful beaches' of Ondarreta and Zurriola, La Concha bay and traditional "pintxos" (Basque tapas) bars are some other things that the media usually recommends of this 'picturesque city'.

It is also a lovely spot to celebrate weddings, not only of local people but also of foreigners that are in love with the city and want a location for their wedding that offers both "exquisite surroundings" and "an amazing cultural experience" for their guests.

Fran and Edurne, the newlyweds on the YouTube video, were welcomed after the wedding ceremony by some Basque dancers who were expected to dance an aurresku, a popular Basque dance usually performed in weddings or as a tribute to authorities.

The dancers, good friends of the bride and bridegroom, had danced in the past with Fran in some other weddings and had kindly accepted to do the same for him. Everything looked normal but just as the first sounds of the aurresku sounded, the two dancers together with another 27 wedding guests put their sunglasses on and started to dance the tunes of Black Eyed Peas' I got a feeling.

"When we saw the Oprah Winfrey video in Chicago, we thought about surprising them," says Iñigo, one of the dancers. "The song is really cheerful and it was the right one to give strength to the wedding", he adds.

They started rehearsing in July, at first in the Lasalle school and then on the Manteo sports center. Iñigo learnt the choreography and added some steps. Although at the beginning not may people turned out, the rehearsals got more crowded as the wedding date was closer.

Secrecy was crucial to assure that the Black Eyed Peas dance took the newlyweds by surprise so the dancers insisted on the fact that no one could talk about that. The children taking part on the dance were the last ones to know about the dance so they assured the children did not see Fran and Edure before the wedding day.

"They were delighted", Iñigo says. "It was a really nice surprise for them. After the wedding reception, they played the song several times and everybody danced", Iñigo recounts.

They never thought that their video was going to become a You Tube sensation but they are really delighted it did. "We were satisfied with the people at the wedding, but we have also appeared on EITB's news programs, incredible!" Iñigo says.